I was glad to hear my former chief technician’s son, a recent college graduate, had received multiple job offers. Some would argue that with low unemployment and a strong economy, his odds were good for finding a job. That observation, based upon macroeconomics, ignores the character of the job seeker. While one position was an entry-level spot in an Internet firm, the other job offer included a paid training program for a position selling business software. He chose the latter offer with the understanding that through contacts and hard work his goal of a career in business would be realized. The fact that he played college lacrosse in Division I featured prominently in his job applications.

A commitment to D-1 athletics for four years requires dedication of one’s time and energy. It is also a test of endurance. Mr. S had been a standout athlete at his prep school, but he did not get much playing time in college until his Junior and Senior years. The concept of delayed gratification is acceptable when the coach has made his plans known at the time of recruitment. The college placed him with fellow lacrosse players in a dormitory and, working closely with his coach, structured his academic schedule and athletic practice time, including a study hall for enforced concentration on his assignments. As he took advantage of time to grow and to explore his new status as a college student, Mr. S developed the discipline necessary to succeed in both academics and athletics. Training for lacrosse was an all-year endeavor. Players were expected to spend time in the weight room and to be conditioned at the start of the season. Playing a spring schedule meant that Mr. S and his teammates would be exposed to long practices in cold conditions early in the season. Tournaments would stretch out close to the start of final exams. Not only was playing his sport a test of endurance, it was a test of his character.

Why wouldn’t employers be looking seriously at someone with Mr. S’s resume? As a leader on his college team, Mr. S. understood that personal glory at times must be set aside for the good of the team, to achieve a common goal. For a team to be successful, in sports and in business, a sense of shared mission is necessary. But there comes a time when the team sees its leader as the one to take the risk of the final shot, the one who has the confidence to step up and to deal with adversity. Someone who has faced competition and came out on top.

Mr. S. attended the graduation dance at the college of his girlfriend of many years. The couple will share an apartment as she works on her Masters Degree in Special Education. The series of photos from Mr. S’s graduation reminded me of the joy I experienced as a parent of college graduates and of the time of great promise of things to come. I smiled as I read his thank you card after receiving my graduation gift. “Thanks for your gift and for your support over the years. Let me know if you ever need a caddy.” 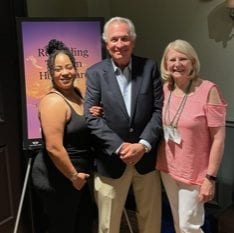